When the never ending summer has day after day of the same weather you yearn for something, anything, that's just different. Variety, after all, is the spice of life. And we Phoenix residents are a funny bunch. We're never more happy when clouds appear over the mountains, even happier when they deliver rain.

So at this time of the year it's nice to be…cold. It's been bitterly cold here in the mornings every day this week. Like, see your breath and make sure your plants are covered, cold. My car's dashboard pinged a 'low temperature outside' warning as we hit 32°F driving to school.

There's just something about being able to wear a coat, sip hot Americanos, and breath in that crisp air.

Death By A Thousand Cuts

Back in December I wrote about Twitter and Mastodon lamenting the possible demise of the service I've grown to love; and noting we have that Mastodon lifeboat to climb in if such a demise came to pass.

Time passed. Idiotic management decisions aside, Twitter still held together. Sure the tech folk I follow have abandoned Twitter in favor of Mastodon but like 85% of the people I follow are still there. So I've been trying to better allocate time to switch between both services.

And things were mostly fine.

Last night around 11pm ET, Tweetbot and Twitterrific stopped working, with authentication errors. They’re still down, as are other popular clients. Twitter has said nothing, either publicly or in communications to the affected developers, so your guess is as good as mine whether this is an unintended outage from Twitter’s skeleton crew staff or a strategic decision to pull the plug on third-party clients.

The API is still functional so this was a selective and intentional targeting of third-party clients. I've been a happy Tweetbot user for years and this is an incredible poke in the eye and fuck you to the developer community.

The Twitter experience was always so much better with no algorithmic timeline, no promoted tweets. Just chronological order like the good lord intended. So I've installed the official Twitter iOS client today and it's…not great? Look at all those ads and "hey add your birthday to your profile" messages interspersed with actual Tweets. Yay.

So this is another death cut for me. Only 994 left to go? But seriously, what to do from here? Unless everyone I follow on Twitter also jumps ship I'll still want to hang around and interact with Twitter peeps. A social network lives and dies by who's there. What a sad sorry state of affairs.

Fucking Elon Musk, that guy has a lot to answer for.

What happened was, my car decided it wouldn't recognize either key fob just out of the blue. So I'm here at the car dealer having all the things diagnosed. As I sit and wait, the chap sitting across from me is asleep and snoring. And they have The Price Is Right on TV. Please send help.

I have a complicated relationship with Depeche Mode. But first some history.

The very first Depeche Mode song I can remember hearing was Shake The Disease back in 1985. I must have been eleven years old? There was a boy who lived across the street that I was friends with. He was a couple years older than me and had bought the song on 7" single. I can distinctly remember him bringing it over and we listened to it on my Dad's record player in our living room.

I didn't know it at the time, but that would change things forever. I'd found the exact song, the exact band, the exact type of music that would become the soundtrack of my youth.

One of the first albums I ever bought on vinyl with my pocket money was The Singles 81→85. I played that album to death. And it was the start of my teenage Mode vinyl addiction that spread to buying every album and 12" remix of any song I could get my hands on. Any excuse to go into a record shop to look just in case there was a rare mix I didn't own.

It wasn't just vinyl. I'd go on to buy every single VHS tape of videos or concerts – eventually wearing out my copy of The World We Live In And Live In Hamburg. Over the years I'd end up seeing them live six times, the best of which on the Devotional tour at Crystal Palace in London 1993.

So why a complicated relationship?

The Depeche of the Alan Wilder golden years is my favorite band of all time. Hands down. Not even close. To me, this body of work will never be bettered:

Alan left of course. The band continued without him and would release a further six albums. All of which I still bought, because Depeche Fucking Mode.

But herein lies the rub. Any long time fan will tell you the albums of the later years are (whispers) not great.

And so we fast forward to the year 2022. Two major things happened. Fletch passed away. Dave and Martin announced a new album.

So, yet again, even after being burned so many times before, I find myself looking forward to a new Depeche album. Maybe this time it will be good?

I've been a music stats junkie ever since I heard about last.fm in 2006. And every year I look forward to the end of year review. Unlike Spotify with their 'Wrapped', last.fm actually do this correctly by acknowledging that December is a month in which people still listen to music.

So how did it shake out? 20,493 scrobbles – a slight increase over 2021 – but I'm still listening to less music than I used to. Podcasts are 100% to blame here. And there are only so many hours in the day for competing media attention in my ears. No surprise Depeche were the top band. Fletch's passing meant I went on a bit of a nostalgic re-listen to their body of work. A decent year for synth acts overall and I'm really loving Korine at the moment. Kinda funny that stalwarts Rammstein still make an appearance in every one of my end of year lists. And I really really really loved Suede's new album and played that a lot. tl;dr you had one job.

Facepalm: LastPass, one of the most popular password manager services out there, was breached this past August. The company is now saying that the damage done by the unknown hackers is much worse than was initially assessed. Users should change their passwords asap

Yeah having the actual vault stolen is unforgivable. I tweeted last week when I read the news.

Oh lastpass. Spending the day changing every password I ever had in the history of ever, moving to bitwarden, and setting my lastpass account on fire. How's your day going?

With every single password from my lastpass vault now changed (not updated in lastpass obviously) and added to Bitwarden, time to nuke the account from orbit. This was a satisfying confirmation to read:

Your LastPass account has been permanently deleted and all of your data has been purged from our systems.

All About The T-Shirt

Tiny wine place, friends, and an owner my age with a hoodie barely covering the Dead Kennedys t-shirt.

And so began the not insignificant time sink binge re-watch of the entire six seasons of Lost.

Arguably where the era of prestige TV began. Arguably one of the best TV shows of all time. It's been hovering around my own personal top three since it ended in 2010. Mind blowing to spend six years on the once a week release of a story that captured the internet of the era. So many fan theories on message forums and it was just so fun to trade ideas and have people point out easter eggs in scenes.

Look, here's a still capture of that Shark with the Dharma logo on it – what does it all mean wtfomgbbq!!!

So how did it hold up on a binge watch? Let's just say Lost has cemented itself as my favorite TV show of all time hands down. I did wonder how it would feel knowing the plot twists in advance. And it was ok. I must say though I do envy anyone watching this for the first time. You're going "wait, did Kate know Jack before the Island? I'm so confused." followed by the record needle scratch of Jack going "we have to go back" (mind explodes).

What I realized this time around was that even though they didn't (couldn't) answer every possible fan question, they still did a pretty damned good job. But the real thing that stood out on a binge was that Mystery Island wasn't even important at the end of the day. What really mattered were the characters, their stories, their interaction. This show has some of the best well written characters of any show I've watched and I just love them all. Locke, Sawyer, Kate, Jack, Desmond, Ben.

You know you've watched something special when you've got that sinking feeling of no more episodes. I can't recommend this enough. If you're one of the few people left on the planet who hasn't watched it, go do that immediately.

With Elon buying Twitter and offering a masterclass of clusterfuck management, predictions of its demise were abound. Some people I follow abandoned ship and fled to Mastodon. Some hedged their bets and started posting on both services.

I like Mastodon and its decentralized nature is very cool technology. I created an account back in 2017 presumably the last time there was a Twitter kerfuffle. And I posted a couple things there during this latest one. Very quickly it became apparent that keeping track of both services was going to be tricky. On my best days I find it hard to keep up with just Twitter.

So a bit of a fork in the road has occurred. A social media service lives and dies by where the people you follow are. And for right now, that's still Twitter. So for the time being my focus will be there. But at least Mastodon is a thing that we could get into the Twitter lifeboat and sail to if the need arises.

To that end I'm at @kevinspencer@mastodon.cloud.

All Over The Map

I mean, these should have probably been tweets.

How can you be from England and not drink Tea? I was asked. And it's true – I'm on team Coffee 100%. But a funny thing happened, I actually had a cup of tea today and it was pretty great.

I've been running 4 miles about 3 or 4 times a week pretty consistently. But thanks to the great Phoenix desert summer, it's been indoors on a treadmill. It's the time of year where I can start doing that outside again.

I've been listening to a lot of Korine this week. Synthwave goodness.

If you go looking in this fair City of ours, there's a lot of fantastic street art. 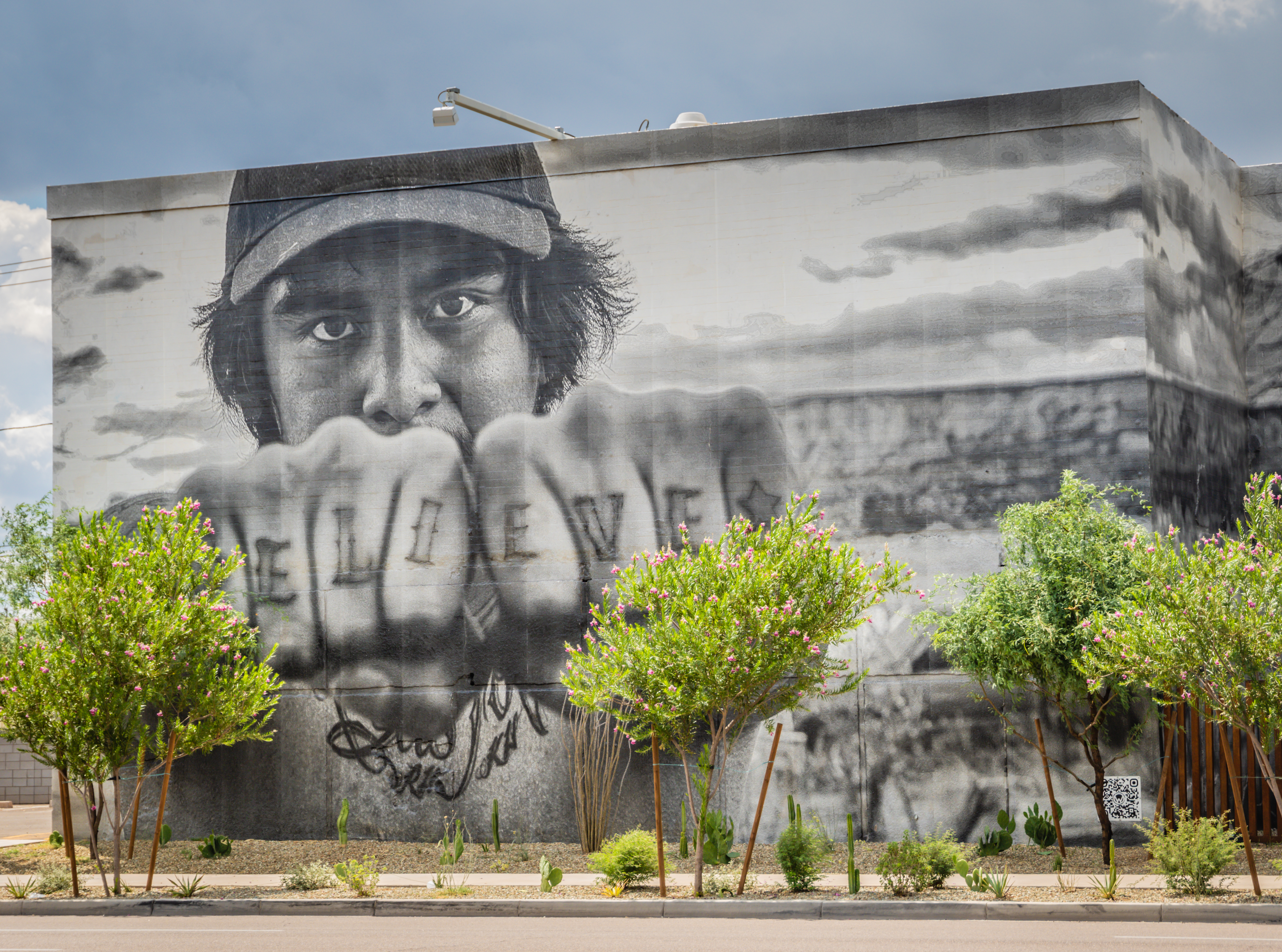 We live across the street from a mountain. That I've not hiked in the 4 years we've been here. What the hell?

In about a month I will be 49 years old. Turning 50 next year. What the hell?